Throughout history, essential oils have been used in almost every country by most of the cultures of the world. They are some of the oldest and most powerful substances known to man.
Historical records inform us that essential oils were used for religious rituals, flavoring foods, perfumes, anointing and healing. This evidence is found in the texts of many ancient writings including almost all faiths. They were highly valued and a part of everyday life. References to aromatic substances include spices, resins, barks, flowers and rind.
It’s understandable that people wanted to smell nice aromas and to smell better themselves. After all, in ancient times, personal hygiene was sometimes much different than today! The fact that plants were used in so many ancient rituals prompts us to believe there was ancient wisdom in how nature supports and even heightens ceremonies that are meaningful and important.
Most curious, though, is the historical use of plants as medicine. Although it’s impossible to know exactly when plants were first used as medicines, records dating back to 5000 BC describe the use of aromatic substances for both medical purposes.
Let’s look more closely at how some ancient people used essential oils.
The oldest known records documenting the use of plants for medicine date back to 5000 BC when ancient Sumerians recorded on clay tablets which plants, they used and how they used them. Their carvings included references to more than 250 plants and suggest they had an advanced understanding of plant constituents such as the alkaloid characteristics of poppy, henbane and mandrake.
Around 3000 BC, Babylonians recorded their use of fragrant plants and medicinal herbs. They imported frankincense from Africa and based on their records, it is thought they burned about 57,000 pounds of frankincense a year.
By about 628 BC, Assyrians came into the same Fertile Crescent area bringing their own practice of using plants for medicine. They, too, left extensive records showing the preferred use was fumigation – smoking fragrant herbs over a hot fire to produce fragrant smoke. Among others, they used calendula, chamomile, fennel, myrrh, saffron and turmeric.
Essential oils were used extensively in ancient Egypt. Records reveal that Imhotep, who was considered the “father of Egyptian medical science,” mainly used medicinal plants and their essential oils as medicine. Egyptians also used essential oils for personal use, hygiene, and embalming.
Hieroglyphics on the walls of Egyptian temples depict the use of oils including numerous recipes for the blending of oils. 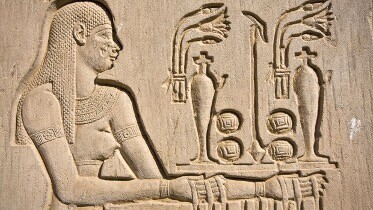 Egyptians placed essential oils in alabaster jars which were specially shaped and carved for filling with essential oils. Beautifully decorated containers found in King When King Tutankhamen’s tomb was opened in 1922 more than 50 alabaster jars were found that once held more than 350 liters of oils and they contained traces of oils that were still fragrant!
Use of essential oils in ancient Egypt is further documented in the oldest and most important medical document known as the Ebers Papyrus. Dating back to 1550 BC, this scroll is currently housed in the Library of the University of Leipsig in Germany. It contains 800 formulas and recipes for medical remedies using plants like myrrh, frankincense, myrtle, galbanum and others.
Personal hygiene was important to the Egyptians whose climate was hot and dry with very little rainfall. Egyptians may have been the first to record recipes for body deodorant and their use of plant-based perfumes was closely linked with religion. In fact, each Egyptian god was assigned a particular fragrance and that fragrance was often used to anoint their statues. Do you remember seeing pictures of Egyptians with cones on their heads? Those cones contained fat along with essential oils which would melt slowly in the hot sun. The melted fat would cover their head and body with the aromatic mixture.
At about the same time, plants and their essential oils were also being used in ancient India. Traditional Indian medicine is known as Ayurvedic meaning “life knowledge.” It’s the oldest form of medical practice in the world. They documented how they used plants like sandalwood, ginger, myrrh, cinnamon and coriander in a holistic manner to treat all sorts of illnesses.
Ancient Egyptians applied their understanding of the antiseptic and antibacterial properties of the oils when embalming the dead. They believed the oils helped to preserve the flesh for 3000 years which is how long they think it took for the soul needed to reincarnate.
Traditional Chinese Medicine (TCM) was used in ancient China as early as 2500 BC. It involved acupuncture, shiatsu and herbal remedies. Around 2800 BC, Huang Ti, the Yellow Emperor, wrote a book called Internal Medicine which documented the causes and treatment of disease including many plants and herbal remedies. It is believed most citrus essential oils originated in China.
Clearly, ancient wisdom included the use of plants and their essential oils in all facets of life. From the time of creation when Adam and Eve were placed outdoors in a garden, plants were a part of everyday life.
That ancient wisdom seems to have gotten lost in modern times, yet we are seeing a renewed appreciation of how plants may support health and wellness needs.
Knowledge of why, how, and when to use them involves an understanding of the true meaning of health and a willingness to take responsibility for the things we put into and onto our bodies.
Over the past 15 years, I’ve helped hundreds achieve their wellness goals and I’d love to help you also. Click the link below and let's chat to see if essential oils might become a part or your wellness routine. I know what they've done for me and I'd love to help you experience them in your life.
Important Disclaimer:
I’m not a doctor. I don’t diagnose, treat, or prescribe medications. Content here is not intended to be a substitute for professional medical advice, diagnosis, or treatment. Always seek the advice of your physician or other qualified health provider with any questions you may have regarding a medical condition.